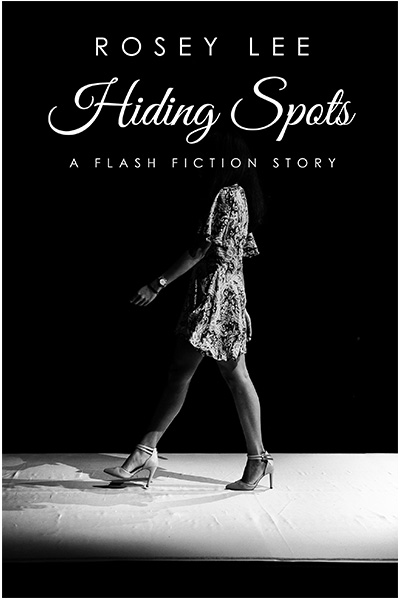 “Where have you been?” I asked.

It was 6:52 a.m. and my voice echoed in the quiet corridor of the hospital’s rehab wing. I fought to contain my emotions, but I found some deliverance in the echo’s dramatic effect.

Chad stood 20 feet ahead of me, in the doorway of his mother’s room. He glanced at me, his eyes widening briefly. I simultaneously became aware of the piercing click-clack of my four-inch stiletto heels on the shiny vinyl floor as I barreled toward him.

A charming grin spread across his face. What might have been an innocuous gesture under different circumstances further transformed my veiled relief into anger. I pivoted and walked away before he could answer the question burned into my mind. It didn’t matter what answer he gave. I wouldn’t believe him anyway.

I felt empowered with each step I took.

Something told me I’d find him in Mrs. Wilson’s room, so I stopped by on my way to work. We were supposed to meet there last evening, but he never showed up and didn’t answer my calls the entire night. Chad visited his mom almost everyday. Not wanting to alarm her, I didn’t mention my concern.

I couldn’t sleep all night. I feared something terrible had happened to him. We’d finally gotten engaged but I wondered if we’d make it to our wedding. I spiraled down a path of what-ifs, imagining everything from cheating to foul play, but deep down I suspected he was fine. Chad had never disappeared before, and it only took one time to get my attention.

I scurried to the adjacent Imaging Center. Approaching the rear entrance of my office suite, I quickly removed my heels and exchanged them for the quiet ballet flats I always kept in my bag. I planned to skip radiology case conference and needed to avoid announcing my arrival to my colleagues who were already gathering for the daily meeting. I felt so small. I was a few inches shorter at my natural five-foot height, but as I sneaked down the hallway, the humiliation of the morning’s events also weighed on me. I slid into a cluttered storage room and nestled with my iPad in a battered faux leather chair among the other cast-off furniture.

I’d never felt inclined to check Chad’s phone or email in the two years we’d been together. But I needed information, and Chad’s email account and calendar were easy to access. We had exchanged email passwords after our engagement, but I felt nauseated admitting to myself that using them might reflect a larger problem.

Chad’s email account was chaotic. Usually meticulous and organized, he hadn’t arranged his read messages into folders in months. Even when his mom was rushed to the hospital last month with a heart attack, Chad checked email and responded to urgent messages in the waiting room. But he hadn’t opened any messages or taken any meetings for the past two days.

I pored over Chad’s calendar and noticed weekly evening appointments labeled “Mary” during the time Chad had told me he was at the gym. The same address was listed as the location for each appointment.

My hands trembled. Contemplating the purpose of these mysterious meet-ups, I took three deep breaths and said the Serenity Prayer. Then I said it again—slower this time, the end of each line punctuated with an increasingly intense breath.

I Googled the address and was stunned to discover that it wasn’t a hotel or some random woman’s home. It was a mental health facility.

Chad and I had talked about our health histories, including his bouts of depression. His symptoms had been managed with counseling, but he’d stopped going after his longtime therapist moved away last year. Now I realized he wasn’t coping as well as I thought.

I was overcome with guilt that I’d missed the signs, including ghosting me last night and taking a week off work last month with no real explanation. Tears poured down my face as I played everything over in my head. I cried the tears I was too afraid to cry the night before and too angry to cry this morning. I cried imagining the pain that had driven Chad to isolate himself from the people who loved him the most. I cried from the relief that I hadn’t lost him to someone else. I cried because I wanted to fix this for Chad, even though I knew I couldn’t.

The rehab wing was busy when I returned. A mixture of footsteps, talking, and elevator bells muffled the click-clack of my heels as I approached the room for the second time that morning.

Chad didn’t hear me when I walked up. I stood in the doorway and watched him. His body slumped in the chair beside the bed. His hands covered his eyes. He looked defeated, like he was about to collapse under the weight of what he was hiding.

He lowered his hands from his eyes and sighed. “Yeah, Mom just went to physical therapy. The doctor says she’s coming along on the cardiac rehab program,” he said. He picked up the magazine beside him and pretended to peruse the pages.

Chad sat erect in the chair and tensed, bracing for an argument. He tried to pull his hand away, but I wouldn’t let go. I expected him to look up at me, but he avoided eye contact.

I rubbed his hand gently. “It’s okay if you need space. I just need you to tell me,” I said.

He relaxed. Then he squeezed my hand. “Thank you, babe,” Chad said. He closed his eyes and laid his head on my shoulder.

“Hiding Spots” was first published in the Winter 2018 – 2019 issue of Literary AMWA and appears on this website with the journal’s permission.