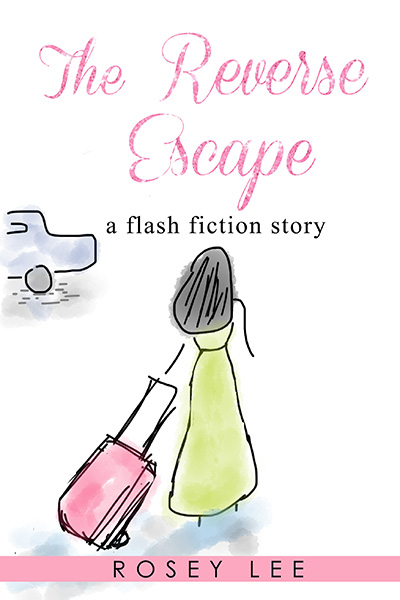 “You didn’t tell me you bought a car. It’s a good thing I don’t have much baggage, I mean luggage,” Ada said, embracing her best friend. “Same difference, I guess.”

Lesley had pulled up close to the airport curb, barely missing the tire of the shiny, silver sports coupe she drove. Ada balanced her weekend bag and purse on her lap and struggled to close the car door, the bottom scraping the sidewalk as she pulled.

Lesley fidgeted in her seat. “No, I got a flat this morning, so I borrowed it from… a friend. I’ll have to make sure to ‘forget’ to tell him about the door,” Lesley chided.

“I’m sorry,” Ada said with a sigh, the new-car smell worsening the headache forming across her forehead.

The frigid air inside the car was a relief from the muggy weather. Ada took a deep breath and silently rehearsed the talking points she’d planned for the weekend. She’d made the trip cross-country to get away from a messy breakup, but she wasn’t ready to talk about it yet. She felt more secure having an imaginary script to follow so she didn’t default to oversharing things she didn’t intend to discuss. It had been a few months since her last visit, and she wanted to enjoy the simplicity of life at home for a few days. Her father’s birthday offered the perfect excuse.

“I was just thinking about my dad,” Ada pretended. “He seems so lonely every time I talk to him. Would you help me throw him a surprise party tomorrow? I promise we can keep it small.”

“I don’t know,” Lesley said. “Didn’t you tell me he doesn’t like surprises? Plus, you’re not good at throwing parties. I always end up doing all the work,” she said with a laugh.

Ada laughed too. It felt good to reconnect with Lesley. She could always count on Lesley to bail her out, and now was no different. Ada started to feel chilly from the air conditioning; the hair on her arms stood at attention. She redirected the air vent and adjusted her seat to a more comfortable position. The purring of the chair motor muffled her opening monologue about the party being an attempt to bridge the distance between her and her father, as well as her plan to help her dad meet someone special. Ada then launched into her strategy for choosing which single women from their church to invite to the party.

“Your dad and I have been seeing each other,” Lesley blurted.

Ada heard none of her best friend’s revelations about the whirlwind courtship with her father. Instead, her mind flooded with flashbacks of their friendship—from being in the same classes and activities in high school to sharing a dorm room in college and renting neighboring apartments after undergrad. Her mom was like a second mother to Lesley; as far as Ada was concerned, Lesley was family.

“I’ve dated men his age, and you were always supportive,” Lesley said.

“But none of them were my father! This is not in the script!” Ada lamented.

“This is not the way my visit was supposed to go! We’ve known each other almost twenty years. You’re like my sister!” Ada snapped.

“But I’m not your sister. Your father was deployed most of the time we were in high school and college. I barely knew him then,” Lesley said. “I talked to your mom about it, and she’s okay with it. She—”

“My mom knows, and none of you told me?” Ada asked. “And how is she okay with it? I know they weren’t happy together, but they were married thirty-five years! I can’t deal with this,” she fumed.

“You’ve barely spoken to any of us since your last visit. Whenever we call, you say you’re studying. We didn’t want to distract you,” Lesley countered.

“You didn’t want to distract me? That’s your excuse? I can’t believe this! Have the two of you–?” Ada demanded.

“No, not that it’s any of your business,” Lesley interrupted. “We’re planning to wait until our wedding night.”

Lesley tried to calm Ada, but the more she talked, the more Ada felt like she was suffocating. She began to sweat. She understood the cold air now. Lesley had witnessed too many of her anxiety attacks to be caught unprepared.

The car came to a smooth stop at the traffic light. Lesley tried to hold Ada’s hand, but Ada jerked away. She gripped her bags tightly, flung the door open, and sprinted down the street.

Ada recognized she hadn’t chosen the safest getaway, but she felt liberated as she ran. The carry-on bag smacked her waist each time her foot hit the ground, breaking her stride, so she slowed to a brisk walk and prayed for peace and clarity with each step. She tearily recalled all the times she had run away from challenges, like fleeing across the country to grad school after her parents’ divorce. Their separation had brought up the unresolved anger she felt because her father missed so much of her formative years. She ignored her feelings but rushed into a romance with her professor, who was just like him, and now here she was, trying to recover. Today was the first time Ada had literally run away, but she resolved she was tired of running. She was too afraid she would lose her father and her best friend.

The weight of her carry-on bag was becoming uncomfortable, and Ada knew the perfect place to gather herself. Her favorite café was a couple blocks away. As she approached the corner, she spotted the silver sports coupe in the coffee shop parking lot.

“I thought you might come this way,” Lesley said through the car window.

“My dad always said you know me better than I know myself,” Ada replied, shifting the weight of her bag.

Lesley nodded. “That’s why I should’ve done things differently,” she said. “Look, this isn’t the way I imagined telling you about this. I feel like I’ve done whatever you wanted since we were kids. I didn’t stop to think about what I wanted. I let you pick the movies we watched, where we went on vacation, even where we went to college. If you ran, I followed. I needed to grow up and go my own way, but starting a relationship with your father without talking with you first wasn’t a good decision. I’m sorry.”

“That’s all true,” Ada said, rubbing her head. “I’m sorry too. I guess I have more to think about than I realized.”

“Are we okay?” Lesley asked.

“Probably. But it’s gonna take me awhile to figure it out. It’s a lot to process,” Ada said.

“That’s fair. Come on, we can go through the drive-through before we leave,” Lesley said.

“No, I need some time. I’ll get to my dad’s house on my own, but you can take my bag and drop it off there,” Ada said, lifting it through the passenger-side window onto the seat. “But make sure to tell him you’re the one who scratched the door,” she said with a smirk.