I don’t usually travel on Labor Day, but I made an exception this year. If you’ve been following my blog posts, you might recall that I made a commitment at the beginning of the year to integrate more activities in my self-care routine that leave me feeling recharged and energized (instead of just focusing on rest and relaxation). On New Year’s Eve, I went to see The Roots in concert. Labor Day would lead me to a concert with a very different, yet equally stimulating vibe—Amos Lee at The Red Rocks Amphitheater in Morrison, Colorado, about 15 miles outside of Denver.

It was a quick trip. I was only in town for 23 hours, but I made every second count. It was probably one of the most efficient trips I’ve ever had. I took the train from the airport to Union Station. I chose the train because it only costs $10.50 each way (remember my post about my love of bargains?), and it’s more environmentally friendly than travelling by car. A friend from college would later join me. 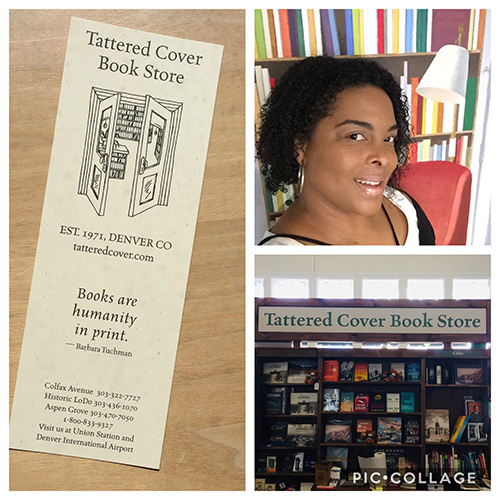 While I waited for her to arrive, I spent some time in Tattered Cover Book Store, one of the largest independent book stores in the U.S. On my last trip to Denver, I didn’t get to spend much time in the store. But this time, I was able to take my time and look around. I even bought a book called Wonderful Adventures of Mrs. Seacole in Many Lands by Mary Seacole (1805–1881). It’s an autobiography that was written in 1857, but I’d never heard of it or the author before seeing it in Tattered Cover. According to the book description, Seacole was born in Jamaican and volunteered to serve as a nurse in the Crimean War while she was in London. However, her offer was refused due to racism. She fearlessly went to Crimea on her own and provided care to wounded soldiers. She received commendations for her work in Eastern Europe during the war, and her service helped open up the medical professions to women. I’m looking forward to getting started on this book!

By the time I finished book shopping, my friend arrived. I was so hungry. We didn’t have to leave Union Station, because its Great Hall is also home to a number of restaurants and shops. We had one of my favorite meals—pizza and ice cream. No judgement, please. I saved my calories for this splurge for 2 weeks. If you’re ever in Union Station, check out Acme Pizzeria and Milkbox Ice Creamery. Milkbox carries 16 flavors from Little Man Ice Cream, a Denver-based company. And the ice cream is spectacular. I had two scoops—Salted Oreo and French Toast. The French Toast ice cream actually has bits of French Toast Crunch breakfast cereal in it. I’m still a little surprised that I love this ice cream so much, because I hated French Toast Crunch when I was a kid.

After floating on the euphoria of pizza and ice cream, I was ready for the evening outdoor concert. Red Rocks is a National Historic Landmark. It was once listed as one of the seven wonders of the geological world, and it’s a sight to behold. The rock formations get their reddish color from iron oxide, which also gives rust and blood their hue. The venue is 6,000 feet high and has 380 steps. I don’t know how many of those steps I actually climbed to reach my seat, but I think I may have worked off the pizza and ice cream by the time I got there.

I’ve seen Amos Lee perform in Atlanta a few times, but nothing compares to his concert at Red Rocks. The music feels even more powerful when he and his band are accompanied by a chamber orchestra in the visually and acoustically pleasing Red Rocks setting. It was ethereal. By the end of the concert, I felt like I’d unloaded three months’ worth of stress. And I was already thinking about what stories I would write next.

Best of the Net nomination

I know it’s been a while since my last blog post. Self-publishing Beautiful, Complicated Family has made things pretty busy. I’m learning a lot during this process, and I’m also having fun. I can hardly wait for November 5 to get here so I can share the collection with everyone.  Despite being pulled in multiple directions, I received some wonderful news yesterday that forced me to slow down for a little bit.

My flash fiction story, “Wind Chill” was published in The Wellington Street Review this summer, and the editors have nominated the story for the 2019 Best of the Net Anthology. The anthology aims “to promote the diverse and growing collection of voices who are publishing their work online”. This was the best surprise I’ve received in a very long time. I am still a little shocked that the editors of The Wellington Street Review selected my story for this honor.

The competition will be stiff. According to the editor’s note for the 2018 Best of the Net Anthology, “hundreds of literary magazines” submitted “well over a thousand pieces of literature” last year. It’s possible that there could be even more nominations this year. Whether my story is selected by the judges for the short list or the story actually makes it into the anthology, I can’t fathom being any happier than I am right now. Many thanks to The Wellington Street Review. If you haven’t read “Wind Chill” yet, you can read it here.