January has been a demanding month. I’ve been on a quest to find a home for three more flash fiction stories, becoming more involved on Twitter (follow me @roseyleebooks), and taking two writing classes. My last post highlighted my commitment to engage in more fun, energizing activities this year. But the busyness of the past few weeks already started to drain me. Thankfully, I found a great way to refuel – Hamilton in Puerto Rico! 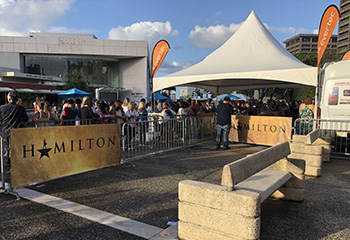 It was a quick trip. I was only in Puerto Rico for about 40 hours, but it was worth it. First of all, temperatures were in the 30s when I left Atlanta. Puerto Rico’s 80-degree climate was a welcomed reprieve, but the musical was still the absolute star of the weekend. As a writer, it was an opportunity of a lifetime to see the musical’s creator, Lin-Manuel Miranda, in the title role. But there was a personal component to the trip as well. As a native New Orleanian, the arts and sports were key in helping New Orleanians heal after Hurricanes Katrina and Rita (e.g., Treme TV series and the New Orleans Saints’ Super Bowl win in 2010). So I relished the opportunity to support Lin-Manuel Miranda’s efforts to raise funds for Puerto Rico’s arts organizations and garner attention for the hurricane-ravaged island. 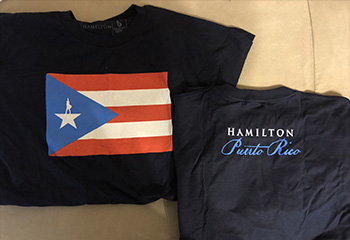 The energy was palpable even before the show began. Bright gold signage stood out among the people already waiting outside. People seemed happy to be in line. Inside the theater, a woman on my row squealed joyfully when she took her seat. I’d never seen the musical before, and I’d tried to no avail over the past couple years to get friends and family members to explain its appeal. Even the writer among them struggled. They all said some version of “you have to see it for yourself to fully understand”. But they were right. It was indeed delightful. The story was intriguing, the music engaging, and performances superb. But I most enjoyed seeing Hamilton in Puerto Rico because it reminded me of the power of creativity and its potential to bring comfort, healing, breakthrough, and power. After all, what greater contribution could writers/artists offer?

I left the theater on a natural high, dreaming of the possibilities for the characters in my head and hopeful that readers will one day see something through my characters that helps them to make their lives and our world a better place. Martin Luther once said “If you want to change the world, pick up your pen and write.” In response, I will paraphrase the lyrics of “Non-Stop” from Hamilton – I’m ready to write like it’s going out of style. Write day and night like it’s going out of style. Okay, maybe not literally day and night, but you get the point.

We’re just over a week into 2019, and I’ve begun to see early benefits from the promise I made to myself to do things a little differently this year. I don’t so much make resolutions, but I set goals. I’ve been trying to tackle work-life balance for years with limited success. I tend to focus on rest and relaxation, but I’ve decided to engage in more activities this year that leave me feeling recharged. And I started on New Year’s Eve.

It’s counterintuitive for me to spend New Year’s Eve outside the walls of my house or a Watch Night service, but I did something totally out of the box. I went to see The Roots in concert. Few things energize me like live music. While I can’t play an instrument and can just barely carry a tune, somehow I still feel like music is in my blood. And I could almost feel the music going through my veins at the concert.

The first gift of the night was Victory Boyd, one of the artists that opened for The Roots. Her voice is ethereal. If you rolled Roberta Flack, Nina Simone, and Tracy Chapman into one and made them a singer-songwriter in her early 20s, you’ve got Victory. She performed a couple songs from It’s a New Dawn and The Broken Instrument, her albums released on Roc Nation. Victory also sang “His Eye is on the Sparrow” and “I Say a Little Prayer” , so maybe it was okay that I missed church after all. And yes I know “I Say a Little Prayer” is not a church song, but she gets extra credit for it anyway. Her sister, MoMo, who shares Victory’s amazing vocal and acoustic guitar skills, joined her on stage. I had a chance to briefly talk with them and their brother, Israel, after the concert. Apparently the whole family is talented but humble. They’re definitely ones to watch. 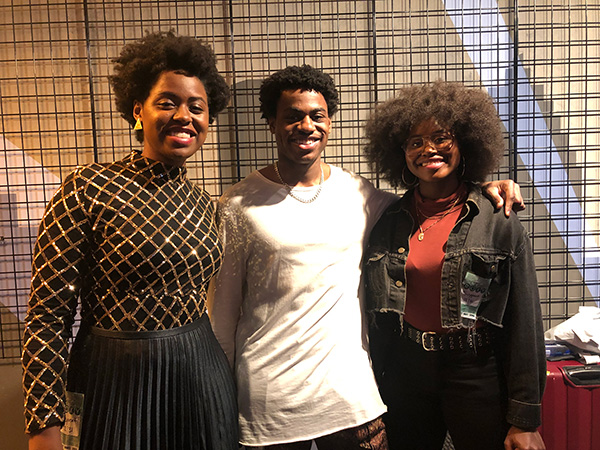 Victory Boyd and her siblings, Israel and MoMo

The Roots has been called “Hip-hop’s first legitimate band”. Their masterful approach of integrating live music into hip-hop has earned them the reputation of being the best live show in the genre. And they did not disappoint on New Year’s Eve. They played all of their classics as well as a variety of covers such as “So Fresh, So Clean” by OutKast, “Knocks Me Off My Feet” by Stevie Wonder, “Flava in Ya Ear” by Craig Mack, “The Sweetest Taboo” by Sade, “Hotel California” by the Eagles, and “Luchini AKA This Is It” by Camp Lo. They even threw in the best rendition I’ve ever heard of the Christmas classic “God Rest You Merry, Gentlemen”. The night was better than I could’ve imagined.

This is the closest I came to getting a photo with
Black Thought, co-founder and lead MC/Singer of The Roots.

More than a week later, I’m still gliding from the energy I got from the concert. And the publication of my first flash fiction story, “Hiding Spots”, has buoyed my high. The story is published in the 2018-2019 issue of Literary AMWA. You can also find it and the accompanying audio version on my Stories page. 2019 is off to a glowing start. I’m recharged and ready to make it the best year ever!